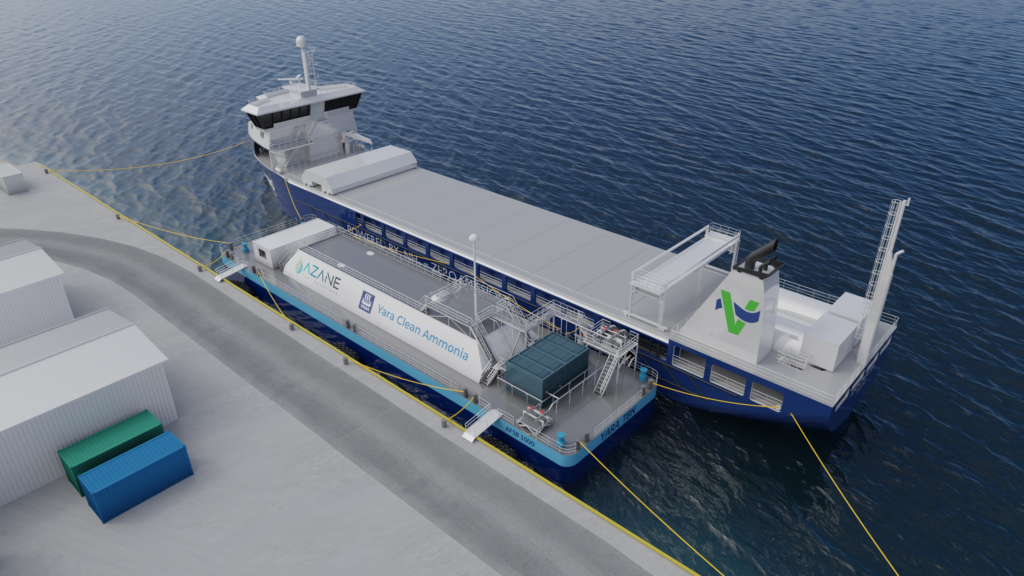 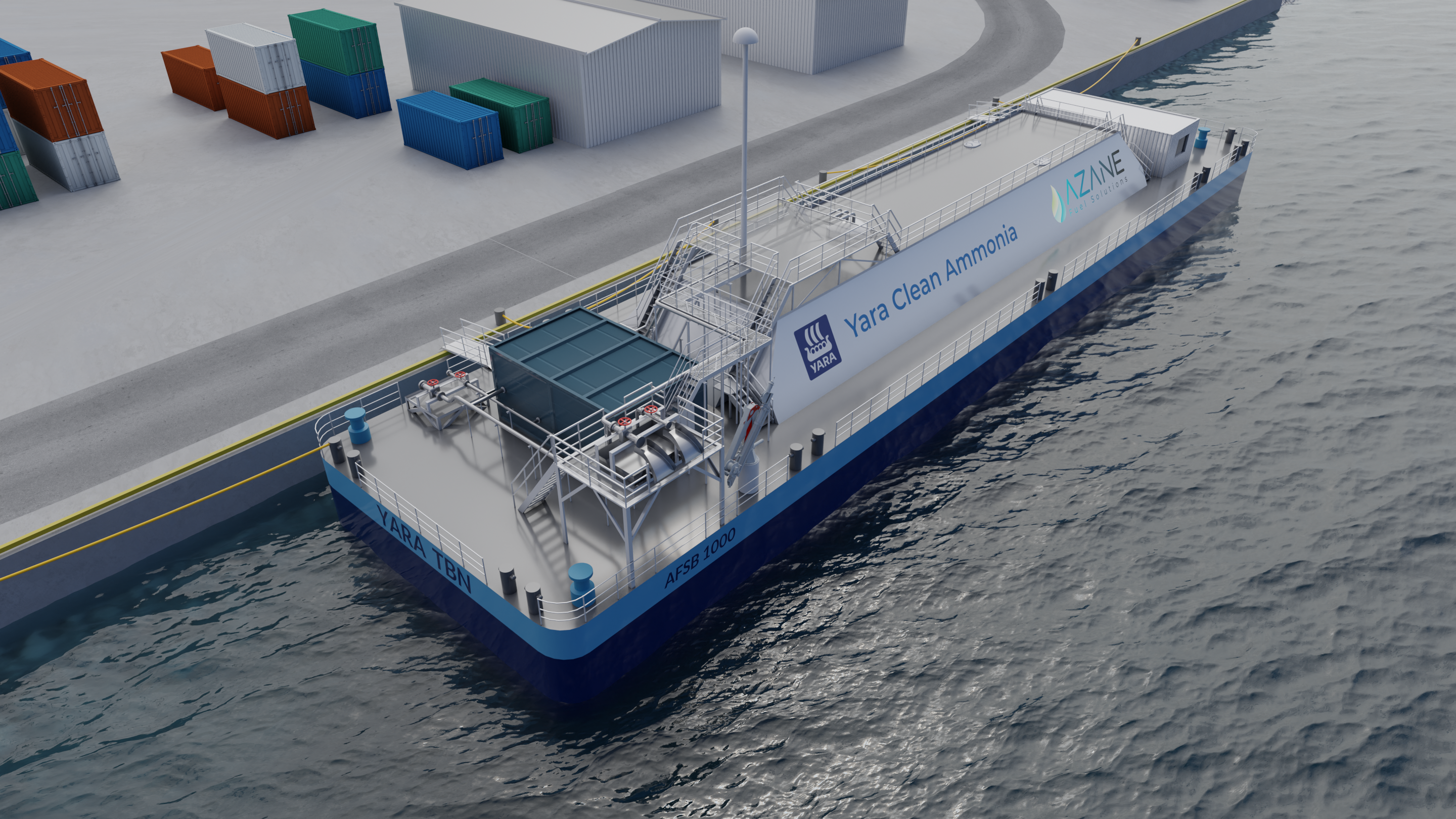 Yara International and Azane Fuel Solutions have signed a commercial agreement to establish a carbon-free ammonia fuel bunker network in Scandinavia. The ammonia bunker terminals will be designed and constructed by Azane Fuel Solutions and delivered to Yara. As one of the world’s largest ammonia producers, the global fertilizer company Yara, will use its position to deliver green ammonia to the shipping industry.

The network of carbon-free floating bunkering terminals is a major step towards making shipping fossil-fuel free.

“These bunkering terminals are key pieces of the puzzle to ensure reliable and safe ammonia supply as zero-emission fuel. Yara is excited to be a part of the project and to own and operate the first operational ammonia fuel terminals in the world,” says Krogh Ankarstrand.

Last year, the Azane Shareholders, AMON Maritime and ECONNECT Energy received public funds from Norway’s Green Initiative program to develop and develop the first pilot unit. They will finance the pilot terminal together with grants from Innovation Norway and the Norwegian Research Council. Subsequently, Yara has pre-ordered 15 units to sufficiently cover the Scandinavian market in a multi-year contract with Azane Fuel Solutions.

“ We are pleased to receive this major pre-order of terminals and for the vote of confidence from Yara to help establish their ammonia bunkering strategy in Scandinavia ” says Morten A. Christophersen, CEO at ECONNECT Energy and Board Member of Azane Fuel Solutions.

Through this agreement, Yara makes green ammonia available as fuel for ships in Scandinavia by 2024. This is a critical step for ammonia-fuelled shipowners.

“For those of us who build ships that will run on green ammonia, this agreement means that we can be sure that the fuel is available for delivery when the first vessels are ready,” says André Risholm, CEO at Amon Maritime, Board member of Viridis Bulk Carriers and Chairman of Azane Fuel Solutions. 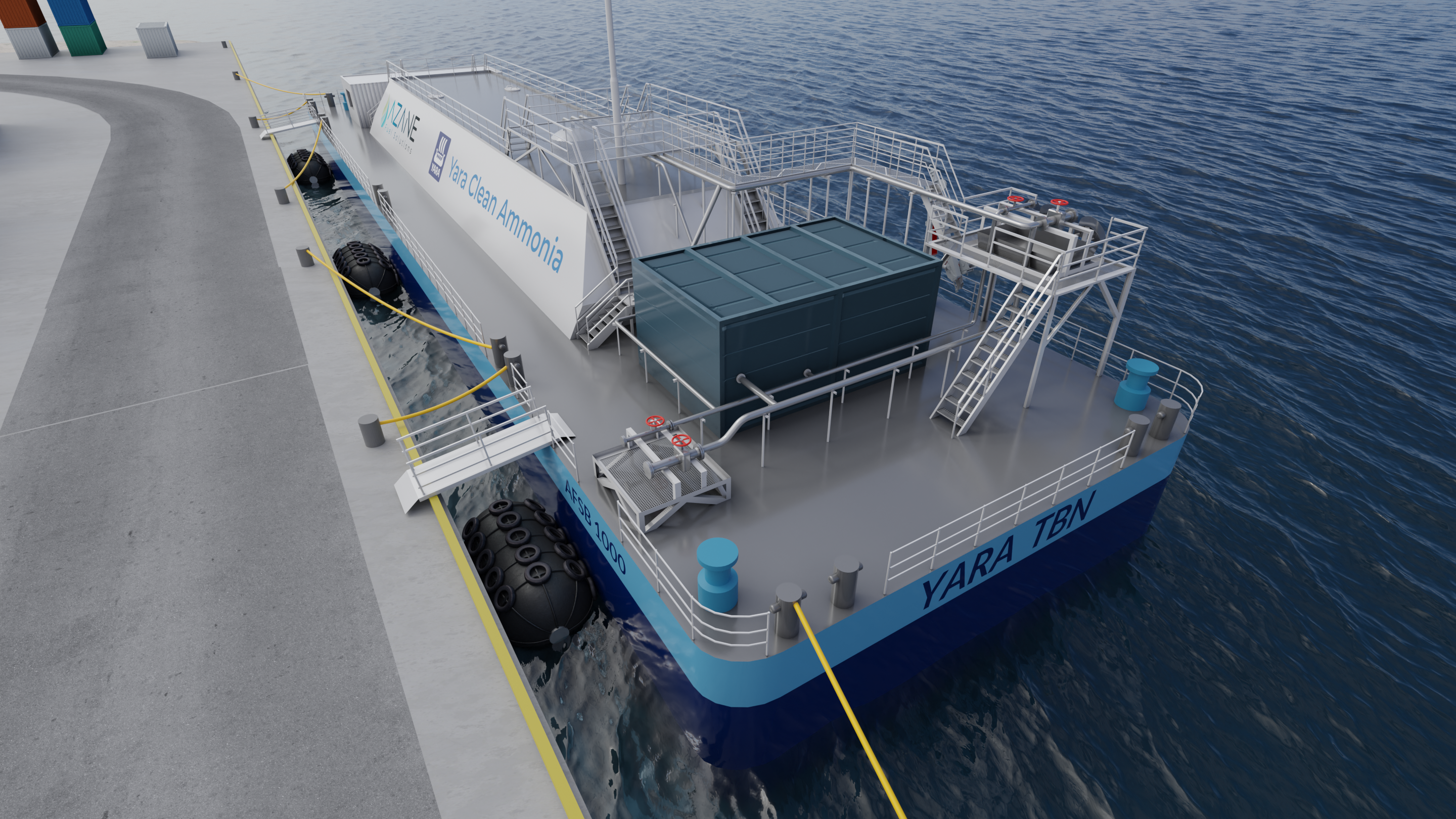 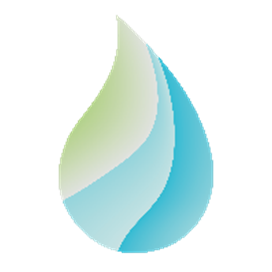 Azane Fuel Solutions is a technology company, focused on providing solutions for small-scale ammonia bunkering. Together with leading project consortium partners, Azane is building the first units in an ammonia fuel bunkering network, realizing a complete green ammonia fuel value chain from production to consumption, in Norway. Over time, the network will grow to span the globe, enjoying the same scale benefits as hydrocarbon fuels today, and eventually achieving cost leadership for carbon free shipping.

The “Ammonia fuel bunkering network” project (AFBN) will overcome significant R&D challenges, and when successful, set the standard for ammonia bunkering. Due to the pioneering nature of the endeavour, the project is seeking necessary financial support from green governmental R&D grants. For more information:

Yara grows knowledge to responsibly feed the world and protect the planet. Supporting our vision of a world without hunger and a planet respected, we pursue a strategy of sustainable value growth, promoting climate-friendly crop nutrition and zero-emission energy solutions. Yara’s ambition is focused on growing a nature positive food future that creates value for our customers, shareholders and society at large and delivers a more sustainable food value chain.

To achieve our ambition, we have taken the lead in developing digital farming tools for precision farming and work closely with partners throughout the food value chain to improve the efficiency and sustainability of food production. Through our focus on clean ammonia production, we aim to enable the hydrogen economy, driving a green transition of shipping, fertilizer production and other energy intensive industries.

Founded in 1905 to solve the emerging famine in Europe, Yara has established a unique position as the industry’s only global crop nutrition company. We operate an integrated business model with around 17,000 employees and operations in over 60 countries, with a proven track record of strong returns. In 2021, Yara reported revenues of USD 16.6 billion. For more information: www.yara.com

Leading the green shift in shipping